Congrats to Sierrah McCarthy for receiving the "All Tournament Team" award at the Sand and Hoops Tournament! 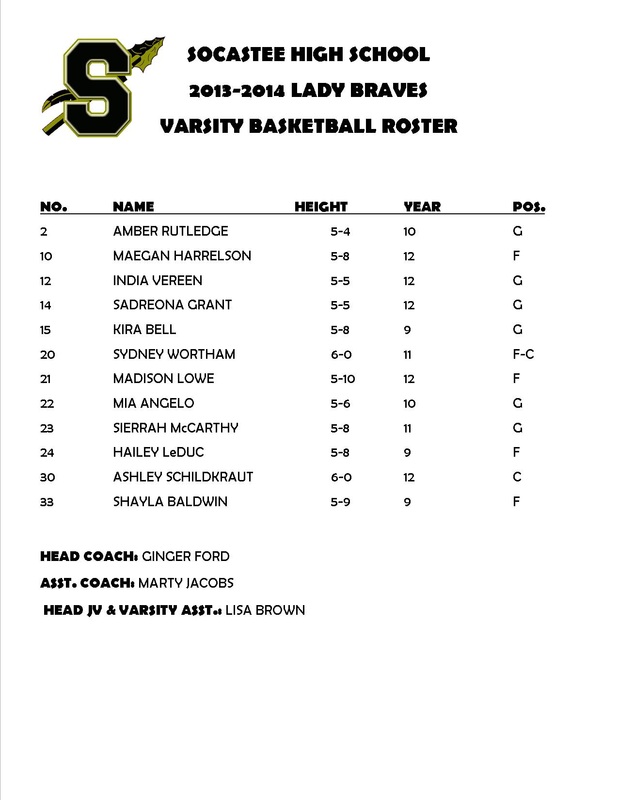 The 2013-14 women’s basketball program at Socastee looks to build on last year’s strong finish. The Lady Braves varsity team is coming off a 16 win season and 3rd place region finish. In their post season, they collected wins against Manning, Stall and lost in the 3rd round to eventual state runner-up, Orangeburg-Wilkinson. Their current goal is to win the region and host a first round playoff game. However, the coaches know this will be a tough task, considering the key losses from the 2012-13 team. Seniors that were lost to graduation were Blake Smith, Kirstin Zarnardo and Heather Kyker.

In her senior season, Kirstin Zanardo led the Lady Braves in 3-point scoring and was voted Best Offensive Player at the team’s banquet.
She was also selected All-Region 2nd Team.

Blake Smith finished her basketball career at Socastee on a high note. She was the Lady Braves leading scorer and rebounder, at more than 12 points and 11 rebounds per game and was the recipient of numerous awards throughout her career. As a senior, she was selected 1st team All-Region, Sun News Toast of the Coast, WPDE All Hoop Zone, North-South All- Star and voted team MVP. Blake was ultimately honored at the end of the year Senior Athletic Banquet as she was named Socastee High School’s Female Athlete of the Year..

Returning for their senior season are starters Sadreona Grant at point guard and Madison Lowe, power forward. Maegan Harrelson and Ashley Schildkraut will add scoring and rebounding. Junior Sierrah McCarthy will be a solid three point threat and classmate Sydney Wortham should be a force to reckon with in the paint and on the boards. Sophomore, Mia Angelo, gained valuable experience over the summer and will add great defensive pressure and scoring to the team. And rounding out the starting lineup from last season is freshman Kira Bell, who was  voted to the All-Region team of 2012-13. Last year’s JV player, Shayla Baldwin, could be a key factor in the rotation. Ginger Ford, who is in her fourth season as head coach, and her assistant Marty Jacobs know that the team will have to be in great shape and have balanced scoring to be successful.

The JV team will bring back Lisa Bell as head coach, but will have many new players and hopefully some surprises. All three coaches are excited about the upcoming season and will again get started  before Thanksgiving as the Lady Braves host their preseason tournament. The 3rd annual ‘ Lady Braves Sand and Hoops Invitational’ will be played at Socastee High School on November 25, 26, 27 at times to be announced at a later date. The tournament field will include teams from Carolina Forest, St. James, Georgetown, Waccamaw, Conway, Cheraw and Mullins. Cheraw and Mullins are previous winners of the event and the Socastee Lady Braves will certainly be working hard to win their own tournament.